It is truly astounding that we have now reached a point in our nation’s history where opioids kill nearly as many Americans as guns. And the trajectories continue to point upward. We have come to expect, and can even reliably predict, the number of Americans who will die by gun every year – and the rate of consistently high, hyperendemic gun violence in America is alarming. As for opioid deaths, we are not sure if we have reached a peak in the epidemic. These devastating numbers, and the traumas they impose upon families and communities, are uniquely American. 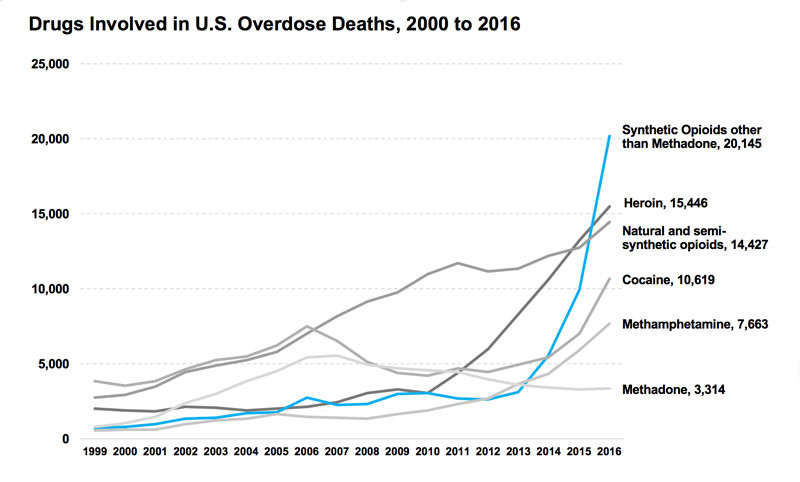 These extraordinary death rates are not occurring in a vacuum. They are happening in the context of adverse community environments – often where lack of economic mobility, high rates of incarceration and other factors are also common. This combination has a toxic effect on health and wellbeing across the lifespan. At Building Community Resilience (BCR), we call this the ‘Pair of ACEs’: adverse childhood experiences in the context of adverse community environments.

This week, BCR networks from across the country will come together to share lessons learned in building resilience in the face of community adversity with one another and with the nation’s lawmakers. This meeting takes place in Washington, DC – a city with one of the highest opioid death rates in the country where, like in other American urban areas, it’s African American deaths due to opioids that are spiking most steeply. East of the city’s Anacostia River, violent crime is down but homicides are up. In March of this year, seven young lives were ended in gun violence in the course of ten days. Tackling community issues such as these will be at the center of a first-ever DC BCR Town hall this week that will bring together cross-sector and community partners from across the country to tackle these issues in D.C. and beyond.

From D.C. to the Dakotas, the effects of adversity due to gun violence and opioid deaths are America’s most pressing public health crisis. We can look to American history to see how we find ourselves here.

Locked Out of the American Dream

Systemic inequities have robbed communities of hope and vitality, including lack of affordable housing, limited economic mobility, crumbling infrastructure and weak or nonexistent investment in public institutions including schools, social services and child welfare. American industries that thrived in the middle of the 20th century provided access to jobs that fueled economic growth in cities and supported a middle class. When those jobs began to disappear it became harder to ignore long-standing inequities.

While racism and discrimination was ever-present and worked to hold back Americans of color, the new service economy fueled by a digital revolution resulted in a growing underclass of all races locked out of the American Dream. Individuals who once prospered during America’s industrial revolution in the coal, steel, and auto industries now find themselves left behind. Using the Pair of ACEs tree as an analogy: as industries folded, the soil feeding the tree now lacks nutrients, resulting in weaker branches and less vibrant leaves. Just as a tree planted in hardscrabble soil, without thriving industry many communities facing declining economies and increasing disparity are less able to bear ‘fruit’ to sustain residents.

The Great Numbing of America: Opioids and ‘Normalization’ of Gun Violence

We have heard how opioid deaths are fueled in part by a ‘crisis of despair' affecting those who have lost hope in the cultural and economic shifts of the late 20th century. One could say the same of gun violence. The great ‘numbing’ of America comes as an entire generation of Americans realizes that for the first time in modern history they may not live as long or as prosperously as their forebears. Numbing has been a disaster unfolding in slow motion. The decline of industry coincided with a rise in illegal drug use and associated violent crime beginning in the early 1980’s. Then something even more pernicious began to occur.

In the late 20th century, seemingly random gun violence moved from urban streets, into workplaces, public spaces such as theaters and malls, and then the hallways of American schools. Over the course of twenty years we have grown so accustomed to these horrific events that the idea of arming teachers has become part of the national dialogue. For American students, the threat of gun violence is as much of the campus experience as homework and homecoming. A recent Washington Post investigation found that more than 187,000 children have experienced a school shooting since the 1999 Columbine massacre.

Moving from Hardscrabble to Vibrant

The nation is trapped in an existential debate—how to find a way to sensibly balance the promise of the Second Amendment with the hopes expressed in the Preamble to the Declaration of Independence recognizing equality and ‘Life, Liberty, and the pursuit of Happiness’. Our inability to balance these uniquely American principles and ideals undermines our collective resilience. How can we expect communities to ‘bounce back’ when gun violence and overdoses are happening in the context of ongoing adversity such as unemployment and lack of affordable housing? Vibrant communities provide buffers and supports that nourish hope, health and prosperity.

In order to reverse the trend in the twin disasters of gun violence and opioid addiction we must address underlying adversities – the Pair of ACEs. Across the country, city and state leaders have come to understand the need to work more collaboratively to address long-standing inequities. As a city leader in Dallas recently told me, ‘eventually all these disparities come to roost at city hall’. In other words, income, racial and infrastructure disparities not only harm those held back – it can threaten the vitality of an entire city. Business leaders in Kansas City, Missouri have come to a similar understanding – if large swaths of the population remain undereducated, disproportionately justice-involved and chronically ill, there are fewer individuals contributing to a viable workforce and thriving economy. No city can survive without either.

Over the past three years, a number of city leaders across the country have joined our Building Community Resilience network as we work to increase collaboration across systems to address inequities to seed and support resilience. We must address the drivers embedded in our communities and culture that fuel American rage, despair and trauma.

Join us in the movement at Building Community Resilience to learn how you can make a difference in your community. #ResilientNation Find us on Twitter:@ResilNation on YouTube and on Facebook – search for ‘Pair of ACEs.’

Frank Sterle Jr. commented:
I sometimes seriously consider whether general male violence is related to the same constraining social idealization (including that by...
Mary Martell commented:
Oh Boy, Great article, alot of info here, will be going at this in small chunks I think Thank you so much, I was a member of Overeaters...
David Dooley commented:
Thank you, Melissa. I missed that.

Melissa L. McPheeters commented:
David, I see that one of the emails asks to keep the address confidential as it is this person's home address. Can you please edit your...

Elizabeth Perry commented:
This is great Teri! I love the emphasis on seeking the awe. Your stories about flowers and hearts and nature resonate. So cool that he...

William Gallagher commented:
Apparently this affected even this field of activity.

Mary Power commented:
Correct link! https://www.sounddiscipline.or...2/SELatHomeFlyer.pdf Sorry about that! Mary
Christine Cissy White commented:
Dearest Dana: You are always so sweet, warm, and loving. You exude connection and healing in how you are. ALWAYS! THANK YOU for being...

Christine Cissy White commented:
Once connected always connected. I LOVE that, Adriana and appreciate the Aroha! I haven't known you for long but appreciate the...

Christine Cissy White commented:
We need a heck of a lot more. I know the Clearity Foundation just intereviewed Gabor Mate talking about the link between stress and...