Over the next week or so there will be articles about the murder of my father's family because unbelievably it will the 70th anniversary on 9/6/2019. We buried my father exactly 10 years ago, on the 60th anniversary 9/6/2009. I truly don't know where the last 10 years have gone, but here we are, another anniversary is upon us. For me, this means bracing myself for newspaper stories, ripe with horrific photos of the killer and scenes from the murders where 13 people were brutally slaughtered in a matter of minutes by a neighbor with access to a weapon.

If you want to tell a story, talk about survivorship, how people lived beyond the very worst day of their lives, like my father, and had a life of value and purpose. Ring the alarm for the need to fund gun violence prevention research, share the devastating statistics of how children are killed by guns that are kept unlocked and loaded. Don't give life to killers and glorify their murder sprees.

To counterbalance the horrific article published, I am sharing the eulogy that I gave at my father's funeral. My father's life and his death had meaning and purpose. 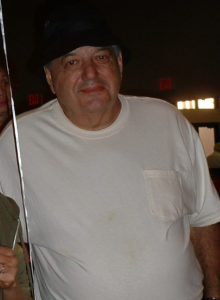 My dad, Charles Cohen, son of Maurice and Rose Cohen and grandson of Minnie Cohen who were murdered on 9/6/1949.

To some he was Charles, or Chuck or Charlie, but to me he was dad.  I know the proudest and most cherished name he had was pop pop to his 7 grandchildren. My dad can be described in two words; simple and complicated.  His needs were simple; he needed my mom and his family and his friends but his life and relationships were complicated.  My dad’s life began simply and innocently, as a child growing up in a Camden neighborhood that he described as Sesame Street.  His life grew unimaginably complicated the day those things were taken from him, September 6, 1949.  He was 12, and at the cusp of adolescence, he was without his beloved mother, father, and grandmother.

My dad would spend the next 60 years, today is September 6, 2009, recreating a simple life in his complicated world.  The fact that my dad is being buried exactly 60 years to the day of the tragic event that would forever change him, is something we cannot really wrap our minds around yet.  In the spiritual realm, it must make perfect sense, in our grieving we are confused.

But my dad was not his tragic past.  He lived beyond that day, he thrived beyond that moment of horror most of us cannot comprehend.  My dad simply created a life out of the ashes of that day.  And the life he created with my mom was full and vibrant and a testament that we can move beyond tragedy. While it remained a deep part of who he was as a person, Chuck was a survivor.  He accepted that title, he acknowledged that part of himself that was a survivor and through his life, he taught us that we must all move on in life and survive the challenges that life will present.

My dad was not a sad and tragic figure.  He held that piece inside.  To the world, he was funny, a jokester, the life of the party in his younger days.  My dad was tall and handsome and had a head of hair that most men envied.  My dad had a joke or a story for everyone.  He was a guy’s guy but he had soft spots in his hearts for his girls.  Dad was big, his presence filled a room.  Sometimes my phone would ring and he would say “is this my Robin, I just wanted to hear your voice”.  Well, Dad, I would just love to hear your voice one more time.

We know that is not possible, so today I speak for Chuck.  I know he would want me to say for him, thank you to my family and friends.  Thank you for putting up with my Mishagas, thank you for making my life meaningful and worth living, thank you for living your life in a way to make yourself and your family proud.  I know he would thank my mom for trying to get him to take care of himself even though he fought her every step of the way.  He would say thank you to his buddies that meant so much to him.  My dad was a grateful person who taught me that things can be taken from you in an instant so live a life of meaning and purpose and always call your mother.

Well Carey, you are the one who inspired me to write this! I am so grateful for all that you and Rafael are doing! I love reading ACES...
22 hours ago

Thank you Rafael! I so appreciate meeting you and do plan to stay connected! I am inspired by both you and Carey and will continue to...
22 hours ago

Hi Laura, Thank you for your comment! I agree with you and have even used the serve/return model within training material. Child...
23 hours ago
I think the dynamic you describe might also be a chicken/egg problem. Caregivers who can't attune might discourage attachment and...
23 hours ago
You are a Light Cathy. Thank you for sharing this beautiful and intimate story.
1 day ago

Thanks Linda! I can't tell you how excited I am to starting helping people use biometrics as a quality measure of trauma-informed...
2 days ago
I would still like the information - I have another training obligation at that time frame - is it possible to get the recording later?
2 days ago
Hi Matthew, So much gratitude for your observation about the benefits of being able to track this valuable information. I am thrilled...
2 days ago

Hi Dawn, I'm obsessively working on it! I've been on a journey to try to integrate biometrics, specifically Heart Rate Variability, into...
1/17/206:02 AM
Hi Matthew...timely I am this week looking to invest in biometric feedback equipment. Would you be happy to share what you are looking...
1/17/205:06 AM

Thank you for this important reminder regarding the power of listening.
1/16/208:34 AM

Beautiful writing and why listening is at least as important as asking questions.
1/16/208:22 AM