As someone with 40+ years of experience coping with various loved ones who drank too much and 16+ years of work studying the scientific research on brain development, ACEs, alcohol use disorders, and the family member's experience, this fact is especially near and dear to my heart. You see, I am the daughter of a parent with an alcohol use disorder.

To further awareness about the connection between "A Parent's Drinking - A Child's Adverse Childhood Experiences," I wrote a post with this title on my blog, BreakingTheCycles.com, March 11. Based on the views it's getting there, I am re-sharing it here. 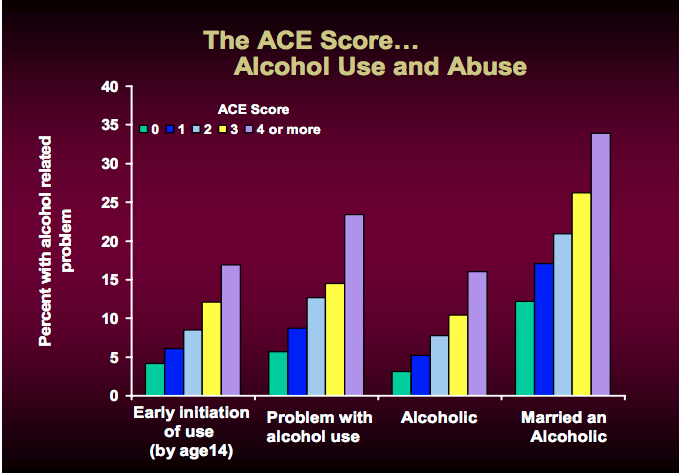 Source: Robert Anda, MD, MS, "The Health and Social Impact of Growing Up With Alcohol Abuse and Related Adverse Childhood Experiences: The Human and Economic Costs of the Status Quo." http://celebratingfamilies.net...bertAnda_article.pdf

As importantly, this connection can cause a child to have difficulty concentrating in school, be misdiagnosed with ADHD, have learning or processing differences, or develop reactionary coping skills, like fighting, yelling, hitting, or angry outbursts. These kinds of reactionary coping skills often cause a child to be labeled a "behavioral problem" and find themselves shunned or bullied by their peers.

The concept of ACEs and their physical and emotional health consequences came out of a study conducted in the late 1990s by Kaiser Permanente, San Diego and the Centers for Disease Control (CDC). It was a huge study involving 17,000 Kaiser patients. The study participants were mostly white, mostly middle to upper-middle class, all had health insurance, and all had jobs.

Participants were asked to fill out a 10-question questionnaire. Then, their answers were compared to their medical histories. The results showed that experiencing adverse childhood experiences were linked to a variety of physical and emotional health problems across a lifetime.

Of the 10 questions asked, the first five were personal, meaning it was something done to the child. These five included numbers 1-5 below. The remaining five were related to other family members’ behaviors that affected the child, numbers 6-10 below:

The study found that almost two-thirds of the 17,000 participants had experienced at least one ACE. Of those with one ACE, 87% had two or more. The more ACEs a person had, the more likely they were to have or develop one or more of the health problems named above.

Now read through this list of drinking behaviors again. And then read through the 10 ACEs listed above. Notice how a parent's drinking (#6 in the ACEs list) -- the cause of drinking behaviors -- can result in a child experiencing eight ACEs (#s 1-8 above). It is not uncommon for a parent's drinking and the marriage dynamics that follow to result in divorce, which is an additional ACE (#10 above).

Drinking behaviors generally occur with one of the following drinking patterns:

Alcohol abuse, which is defined as repeated binge drinking and/or routine heavy drinking.

Alcoholism, which is defined as a chronic, often relapsing brain disease (there is no drink count).

The image below shows various "standard drinks," meaning they contain the same amount of ethyl Alcohol By Volume.

What Can Be Done to Break This Connection

I urge you to learn more about all of these and other concepts, such as:

To answer these kinds of questions and give you the easy-to-understand scientific reasons behind the answers, I wrote my latest book, 10 Year Anniversary Edition If You Loved Me, You'd Stop! What You Really Need to Know When Your Loved One Drinks Too Much (November 2019). This book is the culmination of my 40+ years of experience coping with various loved ones who drank too much and my 16+ years of work studying the scientific research on brain development, ACEs, alcohol use disorders, and the family member's experience. It is available on Amazon (linked in above title), in libraries and bookstores, and through other online book retailers.

And, as always - please feel free to contact me to arrange a phone or Skype or What'sApp call (no charge) to talk about your specific issues. My email is lisaf@BreakingTheCycles.com.

Frank Sterle Jr. commented:
“Positive childhood experiences (PCEs) have profound effects on health and development, buffering against and preventing the harms of...
Rachel C. Allen commented:
This is promising research and a wonderful program. Thank you for sharing.