Thanks to an explosion in scientific research now possible with imaging technologies, such as fMRI and SPECT, experts can actually see how the brain develops. This helps explain why exposure to adverse childhood experiences can so deeply influence and change a child's brain and thus their physical and emotional health and quality of life across their lifetime.

The Power of the Brain

The brain controls everything we think, feel, say and do. If the brain doesn't work, the heart doesn't pump, the lungs don't breath, and the limbs don't move. Without the brain we can't feel love or pain or run or drive a car.

The brain exerts this control through neural networks, aka neural circuitry. Neural networks are the way brain cells (neurons) talk to one another. They, in turn, exchange information with other neurons (cells) throughout the body via the nervous system.

This “talking” is done through an electro-chemical signaling process. 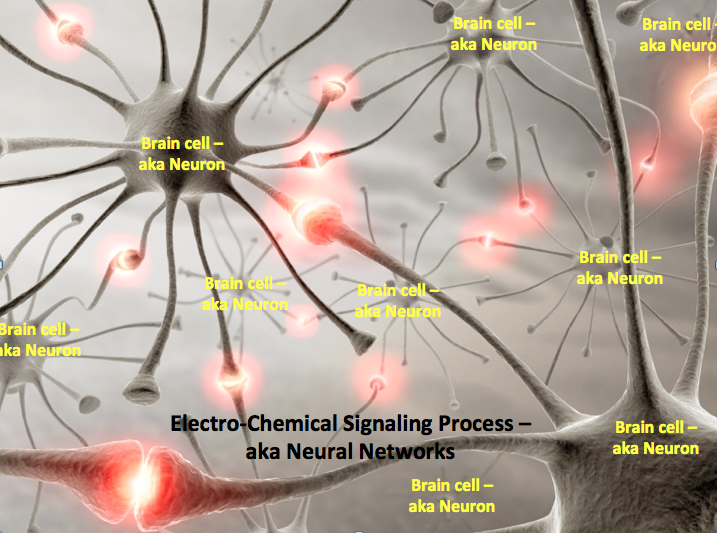 The following is a simplified description of what goes into the electro-chemical signaling process:

Where in the brain are you? There are three general structure groups of neural network activity in the brain. They are the cerebellum, the limbic system and the cerebral cortex. Within each of these are many sub-structures – the amygdala in the Limbic System and the pre-frontal cortex in the Cerebral Cortex, as examples. This means neural network activity in these three areas  is responsible for the behaviors described in the “3-Brain” image above. And this is important. Why? Because it explains that if your neural networks are controlling your behaviors from the limbic system, for example, you are not “thinking,” you are “reacting.” And why is this important to know? Because the limbic system is where key neural networks involved with coping with adverse childhood experiences (ACEs) and the resulting toxic-stress consequences are, for the most part, cued and mapped. And the brain pays close attention to things mapped in the limbic system as critical to one’s survival.

Through a series of connections, neural networks form systems between the brain and other organs to control our body’s major functions. These include the fight-or-flight stress response system, for example, as well as the circulatory and digestive systems.

Neural networks also work together to form “brain maps” for the things we do repeatedly, regularly or on a routine basis (driving a car, typing, reading, walking, talking, as examples). The expression for this is, “Neurons that fire together, wire together.”

And here is an overview of how brain maps are formed…

First Decade or So
We are born with about 100 billion brain cells (neurons), which is about the number of brain cells we have as adults. If the majority of our neural networks were wired at birth, we would come out doing what we do as adults. But about all a newborn baby’s neural networks do is allow it to breathe, eat, sleep, cry, smile and dirty their diapers. [And by the way - the fact that a newborn comes out with these capabilities means there is brain development during pregnancy, as well.]

Thus the brain wires trillions of neural networks in the first decade of a child's young life, given everything a child thinks, feels, says and does requires them.

Then Comes Puberty Around Age 12
Puberty is an instinctual wiring process (meaning it is built into the human species). It causes lots of neural network wiring activity – especially in the limbic system (the "reactionary" part of the brain). The purpose of puberty-related brain wiring is to cause the species to turn to its peers and take risks. It is also to take care of the obvious, namely the development of adult-like bodies capable of reproducing, along with the hormonal changes to make the brain/body want to have sex.

These three instinctual drives (take risks, turn to peers and reproduce) were critical to the survival of the human species back in the day when mankind had a MUCH simpler life — eat, reproduce, survive — and an average life span of about 25 years. In other words, parents were likely dead, unable to protect a child, from around age 12 on, so it was critical to the survival of the species that it be hardwired to go through puberty at around age 12. And for that, the species primarily needed the neural networks involved with fight-or-flight, pain, pleasure/reward, and emotion - all centered in the Limbic System.

And Finally, the “Thinking” (Reasoning) Part of the Brain Starting Around Age 16 and Lasting Until Age 22 on Average for Girls/Women and Age 24 on Average for Boys/Men
This portion of brain development involves:

The lag time between the start of puberty (refer to the first image in this post to see what this looks like) and the start of the cerebral cortex wiring and conclusion of the pruning and strengthening processes (ages 16-20 in that first image) helps explain why children/teens make poor “decisions.” They have not had the experience of coping with and/or surviving trauma or unsettling, scary experiences with a brain capable of interpreting, processing and understanding trauma or unsettling, scary experiences in a productive manner. That capability only comes with development in the prefrontal cortex within the Cerebral Cortex.

ACEs (Adverse Childhood Experiences) refers to traumatic incidents in childhood and were identified in the epidemiological CDC-Kaiser Adverse Childhood Experiences Study (ACE Study). This study of 17,000 participants looked at how 10 types of childhood trauma (ACEs) affect long-term health. These include: physical, emotional and sexual abuse; physical and emotional neglect; living with a family member who’s addicted to alcohol or other substances, or who’s depressed or has other mental illnesses; experiencing parental divorce or separation; having a family member who’s incarcerated; and witnessing a mother being abused.

The impacts of these ACEs are related to toxic stress, which is the repeated activation of the brain's fight-or-flight stress response system (within the Limbic System).

Like other instinctual neural network wiring (puberty, for example), the FFSR is an instinctually wired system built into the human species. It is a system that was intended to kick into gear when mankind was faced with physical danger. This makes sense when we recall that back in the day the primary danger humans faced was physical danger, as in, “Run or Fight," but don’t just stand there! Thus, this system is designed to prepare the body to do just that - fight or run, or if necessary, freeze. And it's a two-part system. One part is the activation -- the part that gets the FFSR going fast and without thought. It's called the Sympathetic Nervous System (SNS). The second part is the tamping down -- returning to normal. This is called the Parasympathetic Nervous System (PNS).

A cue (such as danger-producing emotions like fear, anxiety and anger) triggers the key stress hormones, adrenaline (epinephrine) and cortisol to activate the SNS. These stress hormones cause a number of things to happen to help us RUN or FIGHT.

They cause blood vessels to the skin to constrict to lessen blood loss if injured. They shut down the digestive system in order to conserve glucose needed for energy to run or fight. They cause muscles in the neck, shoulders and back to constrict. They dilate the bronchial tubes in the lungs in order to carry more oxygen to the muscles. And they increase heart rate to push blood flow to large muscles in order to react quickly, run fast or come out fighting. It is truly astounding what the FFSR does in such a short period when triggered (often mere milliseconds, which is how a person jumps out of the way of an oncoming car). This kind of stress is known as normal stress.

Today, however, most of our stress is triggered by thoughts, emotions and memories of negative experiences, not by immediate physical danger. In other words, it might be anger at a parent over the mean, horrible things they said, frustration with a teacher's reprimand, or fear of what's going to happen when we get home, arrive at work or enter the playground at recess. Because we can have these stress-triggering emotions repeatedly throughout our day, a child/teen/adult can repeatedly activate the FFSR.

There are two big problems with chronic activation of the FFSR if one does not have solid, self-soothing practices also mapped -- practices they engage to stop the escalation of the SNS. The first is that a child/teen/adult rarely does the physical running or fighting these changes are meant to support. Instead, all of that “stuff” (increased glucose, shutting down of the digestive system, increased heart rate, and high levels of stress hormones) “sits” and builds up in various body tissues until (or if) it is reabsorbed or used. In other words, it becomes toxic stress because the PNS never gets to fully do its part.

The physical health consequences of regularly activating the FFSRS, but not carrying it through to RUN or FIGHT, are many. They include: upset stomach or other stomach problems (shutting down the digestive system over and over, it's no wonder!), migraines/headaches/skin rashes/hair loss (constricting blood vessels to the skin over and over), racing heartbeat, back pain, muscle aches, sleep problems, changes in eating habits (causing obesity or weight loss), dizziness and the like. These in turn can lead to a person developing a host of physical and mental health consequences -- see image below.

The mental health consequences of regularly activating the FFSRS are equally troubling. These include: anxiety, depression, feelings of hopelessness or helplessness, difficulty concentrating or a desperate need to be in control. As importantly, they change our routine thoughts, feelings and behaviors.

The second problem is that a child/teen/adult maps neural networks to engage this system when confronted with stress producing emotions, thoughts or memories, unrelated to the original ACEs of the stress producing emotions, thoughts or memories. This means when that child/teen/adult is confronted by anything that triggers those danger-producing emotions, such as anxiety, fear and anger, their embedded maps of "reactionary" coping skills and behaviors kick in because the brain has mapped the reaction as critical to survival. (It's mapped in the limbic system.)

If a child/teen does not have protective (resilience) factors in place to guide that child/teen through the various brain developmental years from birth on, a child/teen experiencing ACEs tends to rely on their "reactionary" (Limbic System) coping skills rather than their "thinking" (Cerebral Cortex). The limbic system overrides the cerebral cortex functions. Not only that but it carries into adulthood and thereby changes a child/teen/adults's physical and emotional health and quality of life across a lifetime.

It is Never Too Late to Rewire New Brain Maps

One of the many powerful findings of this new brain research is neuroplasticity -- the brain's ability to reorganize and form new neural networks throughout one's life. The how of this is a whole other topic, but I raise it here because of the incredible work being done around resilience and trauma-informed practices. These practices can help children (by helping their parents, pediatricians, caregivers, neighborhoods, schools, communities...) who have or may experience ACEs to protect, rewire or repair their brains from the consequences of ACEs-related toxic stress during their brain's development.

Check out these five resources (there are hundreds, if not thousands, more across the country):

These are such important questions - and so timely! Please know that I shared your story Parenting with ACEs community site - the issues...
9/2/202:30 PM